Connect with:
Subscribe
HomeNews & StoriesAlumnus Works for Democratic Values in Greece and Beyond
News & Stories
1255 seen

Alumnus Works for Democratic Values in Greece and Beyond 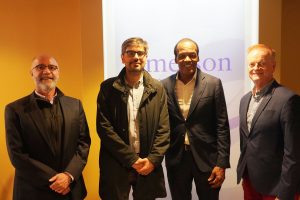 In a world where democracy seems to face challenges at every turn, communication change agent Stavros Kalenteridis, MA ’10 promotes participatory democracy and democratic values in Greece and for Greeks living abroad.

It all began in Plato’s hometown of Athens, when Kalenteridis was able to pursue his political passion at Emerson College, launching his now successful nonprofit foundation, Delta – Political Revolution.

“This a unifying force for all the people, regardless of their political affiliations. Having the democratic heritage in the country that gave birth to this form of government is something we’re really proud of,” says Kalenteridis, who earned his master’s degree in communication management through Emerson’s Communication Studies department.

“The expertise of [Emerson College] is what led me here,” he said. “It’s a school that’s really focused on being vocal about what you’re doing – that was the expertise I was missing. All these ideas, I had to express somehow. I wanted to move from theory to practice. I thought, ‘[Emerson] is my academic podium.’”

While at Emerson, Kalenteridis focused on rhetoric, public affairs, public diplomacy, and public relations before embarking on his capstone project, Delta – Political Revolution. Delta is now an international non-governmental organization (NGO) with 20,000 supporters in Greece, 100 volunteers, 10 employees, and multiple unofficial partnerships worldwide. The cultural aspect of Delta is the Leontida Foundation, which promotes Hellenic culture, history, and democratic heritage.

“[Communication Studies Professor Gregory Payne] used to go through these ideas in my notebook and he used to give his feedback. And it’s really amazing, for him as well I guess, to see what happened back then, happening right now in Greece, and people back here acknowledging our work — which is work that began at Emerson actually,” said Kalenteridis, who credits his ability to sustain the nonprofit to his education at Emerson.

“[Emerson helped me] in getting the idea in the first place and making it really specific, finding my target audience and what they want to talk about, and finding a theme. Emerson helped me position it and present myself as an expert in my field.”

Delta – Political Revolution is based on 10 democratic ideals: independence of the judiciary, equality before the law, meritocracy, transparency, accountability of politicians, independence of local authorities and decentralization, consultation by the citizens, and above all, democracy.

“Everything goes under the democracy umbrella and how we can get the people more involved with what’s going on, their voices being heard and being accounted for. We want to be the go-to group regarding democracy in Greece,” Kalenteridis said, noting Delta hopes to partner with non-Greek, like-minded human rights organizations around the world.

This June, Delta – Political Revolution brought Kalenteridis back to America’s East Coast, where he was invited to address human rights issues for Greeks living abroad at two events: one sponsored by the Pan Macedonian Association of the USA in New York and Washington D.C., and the other by the Greek Pontian Society at the Massachusetts State House.

Delta – Political Revolution also advises business to help them engage employees in a more democratic approach. In addition to public speaking events, Delta – Political Revolution works for reform via books, guest speaker presentations, and publications such as the Greek Huffington Post. The nonprofit is rating Greek politicians regarding their stance on the NGO’s sought-after reforms, and endorsing candidates accordingly.

Equipped with the expertise honed at Emerson, Kalenteridis has this advice for Communication Studies students: Know your audience and what they want to talk about; be specific and really target your message; try and position yourself as an expert; and be as inclusive as you can.

And Kalenteridis would encourage students to embrace their passions.