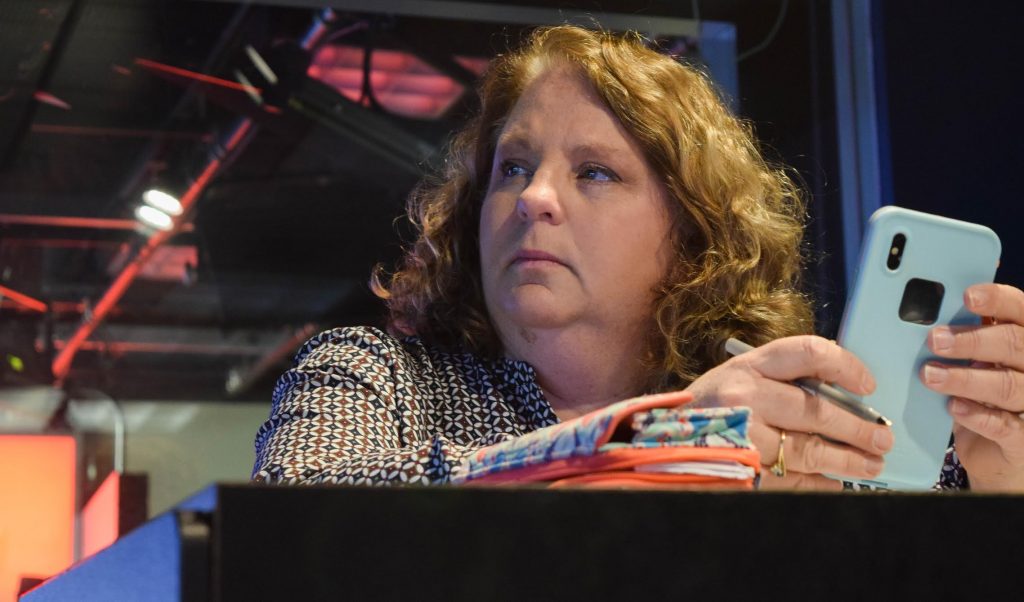 Angela Anderson-Connolly ‘90 has been working the airwaves as a radio journalist for nearly 30 years since graduating from Emerson, telling both local and national news stories as a reporter, anchor, and news director. She came full circle in 2014, when she began introducing Emerson students to the vast media landscape — a role that recently earned her recognition as a distinguished Emerson professor in America’s top-ranked Journalism program.

“It’s an honor to be even be looked at as someone who’s excelled in teaching, because I just feel like I’m doing what I’m supposed to do,” said Anderson-Connolly, who currently teaches TV News Producing. In the past, she’s taught everything from Beat Reporting to Foundations of Journalism to Digital Journalism.

The Alan L. Stanzler Award for Excellence in Teaching is awarded to an affiliated faculty member who consistently receives high Teacher/Course Evaluation ratings. Winners of this award display high academic standards established by the faculty members.

Alan L. Stanzler is a former Trustee and Overseer (now Advisor) of the College. The award was created in honor of his father, Harold Stanzler, who for many years was a part-time faculty member at the University of Rhode Island.

“I’ve always been a mentor,” Anderson-Connolly said.  “Even as a news director, I always coached talent. I’ve always had that teaching instinct, so I kind of bring the coaching into teaching.”

Anderson-Connolly was also awarded Advisor of the Year for her work with WEBN/RTDNA this spring.

“I stay connected to my students. I don’t just have them for a class. They’re a part of me their whole time at Emerson. It’s those connections and those relationships that I got a when I was at Emerson, so I kind of keep it going because I know that’s what Emerson is about,” she said.

Anderson-Connolly can be heard around the country anchoring for NBC Radio News, iHeart Media and Boston public radio station WBUR.

“I always loved telling stories. I always loved writing. I always loved current events. I remember as a kid getting the evening newspaper and my dad and I poring through the paper together. My parents always had the news on,” said the first-generation college graduate.

Anderson-Connolly, who grew up in Wolfeboro, New Hampshire, studied communications at Lyndon State College in Vermont before transferring to Emerson for her last two years. While at Emerson, she studied Mass Communication at both the Boston and Los Angeles campuses, was a reporter for WERS, and interned at local radio stations on the weekends.

“[Coming to Emerson] was the best decision I ever made, career-wise and friend-wise too. I still have good friends. That’s the thing about Emerson, you make these contacts and you keep them,” said Anderson-Connolly, whose daughter, Martha Connelly ’18 (VMA), is also an alumna.

After college, Anderson-Connolly worked as a radio news anchor and then as director for Haverhill, Massachusetts’s WHAV. From there, she went to Manchester, New Hampshire’s WGIR, and WKOX in Framingham, Massachusetts, and then moved westward to become the news director for Talk America Radio Network in Las Vegas from 2000-2004. Afterward, she returned east to WGIR, and eventually came in contact with her former Emerson journalism professor and longtime TV news producer, Marsha Della-Guistina, who asked Anderson-Connolly to fill-in for her class. Eventually the department asked her to stay.

“I kind of fell into it. I wasn’t planning on teaching but after a semester I was hooked,” she said. “I hate to lecture. I like students to do, and in most of my classes, we do. The students here are just so exciting. I’ve seen such an evolution in the approach to news. They’re much more socially conscious and much more passionate.”

Anderson-Connolly exposes her journalism students to areas of news they never planned on covering. What does she do with the students who are afraid to fail? She lets them.

“Those are the moments that they learn, and by allowing students to feel safe enough to take a risk… there’s always a way around fixing what is failed. It allows them to be more creative,” said Anderson-Connolly. “I try to get them away from the grade. It’s more about the process. They’re doing real reporting.”

Students in Anderson-Connolly’s classes go out and find stories, learn how to pitch them, schedule interviews, conduct interviews, and write stories. In her TV News Producing lab class, students put together a 15-20-minute newscast in four hours. Like real journalists under time pressure, her reporters and photographers interview people on the street and then return to class to edit a news package within class time. This year, students conducted live coverage of the Red Sox 2018 World Series championship parade.

“I think my continued experience in the newsroom helps [students] in the real world. I’m seeing it, I’m doing it. I understand what’s going on in the world and I’m living the [industry] change they’re facing,” said Anderson-Connolly, who recently earned her master’s degree in journalism from the University of Missouri. “I’ve learned over the years that storytelling doesn’t change. The ideas don’t change. The technology is all that really changes, so we have to keep up to date.”

What also doesn’t change is the rare and special connection among Emersonians, remarked Anderson-Connelly.