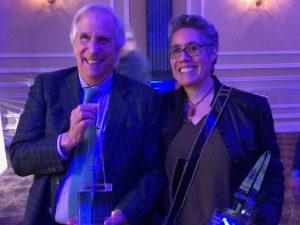 Alumnus Henry Winkler ’67 and Professor Cristina Kotz Cornejo were presented with American Spirit Awards Wednesday, May 29, from The Caucus for Producers, Writers & Directors for their storytelling work.

Cornejo, associate chair of production in the Visual and Media Arts Department, was honored for Special Achievement in Educating New Filmmakers. Winkler, an Emmy-winning actor, producer, director, and children’s book author, received a Caucus Legend Award during the ceremony held in Los Angeles.

“We are thrilled that the Caucus has recognized these two outstanding Emersonians,” said Provost Michaele Whelan. “Their considerable talent and their commitment over time to telling stories that enlighten, empower, and entertain, exemplify the College’s mission and make us proud.”

Winkler recently won a Primetime Emmy Award for Best Supporting Actor in a Comedy for his portrayal of acting coach Gene Cousineau on HBO’s Barry. He is also co-author of the Hank Zipzer children’s book series, about a kid with dyslexia, a condition Winkler shares.

Winkler’s breakout TV role came in 1973, when he was cast as Arthur “the Fonz” Fonzarelli on Happy Days. Since then, he’s appeared in numerous films (Scream, The Waterboy) and television shows (Arrested Development, Parks and Recreation). He’s directed episodes of series such as Clueless and Sabrina, the Teenage Witch, and produced or executive produced TV series and specials, including MacGyver, Better Late Than Never, and the 1977 ABC documentary Who Are the DeBolts and Where Did They Get 19 Kids?, which won a Humanitas Prize. 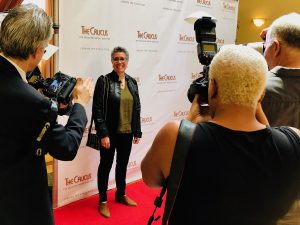 Cornejo was raised in the United States and Argentina, received a BA in International Relations from the University of Southern California, and an MFA from New York University’s Tisch School of the Arts.

Her debut feature, 3 Américas, about a teenager sent to live with her anti-American grandmother in Argentina, was distributed on Netflix and DVD. Her short films have screened at international festivals, and her documentary short, Jewel and the Catch, about an LGBT activist and California’s first African-American female dance club owner, was selected by Outfest to be included in UCLA’s Film and TV Archive. Excerpts from the short can be seen in the opening credits of season 3 of the Amazon series, Transparent.

For 40 years, The Caucus has given television talent an opportunity to network and voice the “creative conscience” of the industry, and continues to stand for more meaningful content across all platforms in an ever-changing television landscape. Through its Caucus Foundation, established in 2000, it has launched the careers of future entertainment professionals with completion grants to student productions.