Two Emerson College seniors were among nine journalism students honored by the Radio Television Digital News Foundation (RTDNF) as part of the nonprofit’s 49th class of scholars and fellows.

Lauren Granada ’20 received the Ed Bradley Scholarship, a $10,000 award given to an outstanding student of color in memory of the late CBS News’ 60 Minutes correspondent who won numerous awards, including 19 Emmy Awards, a Peabody Award, Robert F. Kennedy Journalism Award, and the Paul White Award from the RTDNF.

Wondering what to cook Lady Gaga next time she comes over? Chef Wolfgang Puck showed us her favorite dish! #OSCARS #?? pic.twitter.com/9APSCUqFyO

“I admire Ed Bradley so much as a storyteller because he let the people involved tell their stories, and that’s the kind of storyteller I strive to be,” said Granada, a reporter and anchor at WEBN News. “As a woman of color, I couldn’t be more honored to receive an award dedicated to minority journalists. I hope to inspire other young journalists of color to pursue their dreams.”

Granada is working on her craft this summer as a newsroom intern at WCVB Channel 5 in Boston. 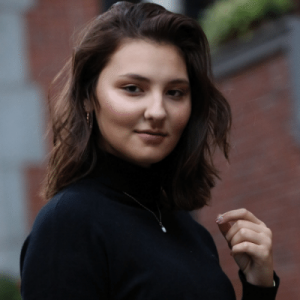 Maya Huter ’20 was given the Mike Reynolds Scholarship, a $1,000 award named in honor of the late KCCI-TV editor,  which recognizes a student’s writing and dedication to news.

“Winning this scholarship validates all of the hard work I have put into journalism over the last two years. It makes me feel like I really chose the right career path, and that my goals in journalism industry are possible,” said Huter, who will be the Field and Features Director for Emerson Independent Video.

Huter said she wants to pursue a broadcast news production career after graduating by starting in smaller local markets, and work her way up to producing national news at a major network.

Along with the nine scholarships, the RTDNF awarded four fellowships to professionals, and all 13 honorees are invited to attend the Excellence in Journalism Conference in San Antonio, Texas in September 2019.