Soledad O’Brien to Class of 2019: Don’t Listen to Advice, Listen to Stories

Award-winning TV journalist Soledad O’Brien is not one to give advice.

As Emerson College’s 139th Commencement speaker and recipient of an honorary Doctor of Humane Letters on Sunday, May 12 – Mother’s Day — O’Brien told the roughly 970 graduates at Boston University’s Agganis Arena that years ago, a magazine asked her to do a feature about the best advice she ever got from her mother.

O’Brien said her mother, who recently passed away, was “never a warm, fluffy, sweet mom. She just wasn’t. She was like a tough, immigrant mom. So I said, ‘I think that’s a really terrible idea.’”

The magazine kept pushing, so O’Brien laid it out.

“I said, ‘O.K. My mom’s best advice was most people are idiots.’ Needless to say, we never made it into the magazine.”

O’Brien said her mother meant that if you listen to bad advice, you’re the bigger fool – a lesson she learned from experience. 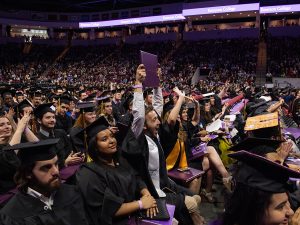 As an interracial immigrant couple in 1950s Baltimore – her mother was a black Cuban, her father a white Australian – O’Brien’s parents’ marriage was prohibited. People would spit at them in public, and even friends counseled them not to have children because of the how biracial kids would be treated. But her parents never felt discouraged.

“She said ‘Lovey, we knew America was better than that,’” O’Brien said. “And by that she was also opting in to make the kind of changes that needed to be made.”

O’Brien told the graduates that they shouldn’t listen to bad advice, but they should listen to stories, because that is where connection, empathy, and change starts.

“Try to hear people, especially in this environment where we live in an information bubble, try to really listen,” she said. “As you calculate student loan debt, and maybe start home debt, [remember] your real debt is to other human beings, and your real job is to pay that debt.”

Throughout her career, she said she tried to find the people whose stories have gone untold for too long, and help them tell it. In this day of polarized politics and social media bubbles, it’s all the more important to bring nuance back into the conversation. 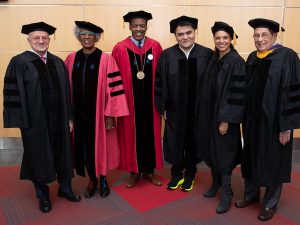 “I would encourage you today to be fearless in searching for the truth,” she said. “[G]o up to people and talk to them about the truth of their lives and their experience, and then fight for those things to get to a platform.”

O’Brien said she also wasn’t a fan of peppering speeches with quotes, but she did want to leave the graduates with one worth remembering, from Dante:

“The hottest places in hell are reserved for those who, in times of great moral crisis, maintain their neutrality.”

“As you head out into the world to jobs and new experiences and more education,” O’Brien said, “Never forget that your purpose is to serve. We’re counting on you.

Check back for more coverage of the 139th Commencement ceremony.

One Hour and Counting Until Graduation to Inspiring Hooding Ceremonies' Speeches

Roger House on Reparations From Slavery and Segregation