Students learn from a Facebook representative how to grow and monetize a brand using video. Courtesy photo

With over 2 billion users worldwide, Facebook is in a league of its own as a social media network. While most people have a personal profile, some are unaware of how the platform can be utilized to reach its massive user base and develop a profitable brand as a creator.

In two on-campus workshops this spring, Emerson students heard directly from Facebook on how to earn money by building and growing a brand during unique Facebook Video Workshops, hosted by Emerson’s School of Communication.

“There’s a community on Facebook for pretty much anything — whether it’s niche or super broad — there’s an audience on Facebook for it. It’s just a matter of connecting with that community so you can get those views and get that community engagement, which will be really important as you think through building a page on Facebook, creating content on that page — and ultimately, the community around that site will be spending money on it,” said Facebook Partner Manager Justin Johnson, who works with content creatives in North America. 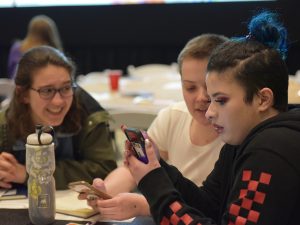 Aside from learning useful tips and tricks for personal branding, students worked creatively and collaboratively under the guidance of Facebook representatives in order to produce, publish and showcase their own original content on Facebook during the workshops, where students were welcomed with pizza and Facebook swag.

Establishing a brand on Facebook first involves building a page. A page should encompass compelling and consistent descriptive and visual content, including videos that express the brand identity, explained Johnson. Students then put this theory into practice, working in small groups to brainstorm a topic for video content.

“At the end of the day, having consistent and authentic content is an important practice to implement so your Facebook community can engage and consume your content,” he said. 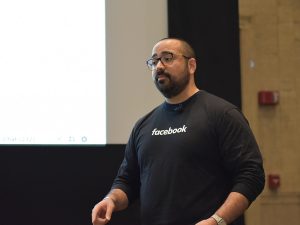 At the end of the presentations, Johnson covered other integral aspects of the platform, such as Facebook newsfeed, ad breaks, fan subscriptions and price points, and sponsored content.

“Ultimately, you are competing for your viewers’ attention so you just want to deliver a great experience for them and provide them with quality content that keeps them interested in what’s next,” said Johnson.

After the event, Political Communication freshman Madison Sims described the workshop as a fun experience and a “really cool way” to teach online monetization of content, especially since she seeks to be a content creator. Creating the group video was her favorite part.

“Because, we took all the knowledge we learned from tonight and tried to put it into one fun little skit that we shared with everyone else, it helped us visualize the aspects of content creation and what we’re going to be thinking about while we’re making it,” said Sims.