Daniella Roberge ’20 has been doing FX makeup for haunted houses for the past eight years, creating gory and ghoulish experiences for Halloween revelers. Her idea to use her skills to help acclimate first responders and military personnel to the horrors they encounter won her First Prize in this year’s E3 Expo.

“I really was not expecting this,” said Roberge, a Media Arts Production major who is minoring in Entrepreneurship Studies. “I had no idea not only that people would get it, but that they would believe in it as much as I did.”

A panel of judges awarded Roberge $5,000 for Dionisio FX on Friday, April 26, after watching 18 students in this year’s E3 (Emerson Experience in Entrepreneurship) cohort present their ventures. Wombi Rose, CEO and co-founder of LovePop, was the keynote speaker.

“It was inspiring to see how they started with a flicker of an idea in September and now their ventures are ready to launch,” said Senior Executive-in-Residence Lu Ann Reeb, director of the Entrepreneurship Studies minor, which culminates with the E3 Expo. 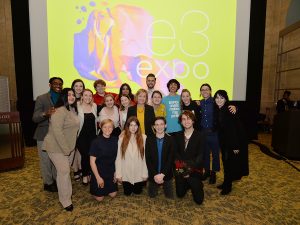 Dionisio FX flickered into Roberge’s head as a service geared toward the private sector and the CIA. But after talking to advising faculty from MIT – E3’s partner institution – and with an EMT friend who said the most preparation they get for what they’ll see is a few dabs of fake blood, Roberge decided to focus on police, firefighters, EMTs, and the military.

The idea, she said, is to prepare soldiers and first responders for the types of casualties they may encounter by providing them with graphic and cost effective special effects makeup services. No little dabs of red corn syrup here.

The hope is that by seeing realistic facsimiles of bodily trauma ahead of time, those first on the scene will be able to react faster and with more focus, and may suffer less post-traumatic stress themselves.

Other winners from the E3 Expo include:

Third Place ($2,000): Samantha Reinstein ’19 for MuSock, a grip and mobility sock for rehabilitating patients that utilizes increased surface friction to achieve greater stability and efficiency during physical therapy and exercise. Reinstein is a Marketing Communication major.

“The variety of ventures created in the E3 program reflect the passion these students have for solving problems and making the world a better place,” Reeb said.