A select group of Emerson College Honors Program seniors presented a diverse range of theses to their peers and teachers in a showcase on April 19.

Thesis topics included reflecting on past and future generations, books and the Internet, immigration, queerness, how opioid addiction is portrayed, and more.

The six students who presented their theses were recommended by their advisors. Several of the presenters provided a statement to Emerson Today on why they chose their thesis topics:

I was interested in writing about Realismo Magico for my thesis for a few reasons, but it was mostly due to an outsider’s perception of Latin America. I am Venezuelan but I have grown up mostly in the U.S., and coming to college and becoming friends with a lot of people that had gone through school in Latin America, I learned about things that they had been taught in school that I had no idea of.

Realismo Magico is one of them. The notion that this was a genre unique to Latin America unlike what I had learned it was — anything from Harry Potter to One Hundred Years of Solitude — was fascinating to me, I had to explore it more. So I did. I read and read and wanted to explore what being an artist in this genre would look like and mean. As I was reading La Casa de los Espiritus by Isabel Allende, I realized that I found myself talking about the environment’s role in the story more than any of the characters. That is when it became apparent that I needed to analyze these stories by reading the environment as more than just a setting. 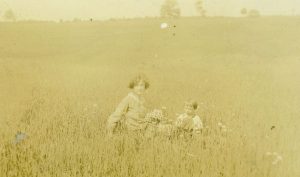 Sara Mae’s great-grandmother in a field of posies with a child.

The short answer is my Grampa’s Alzheimer’s [disease] made me wonder about memory and my own origin story. 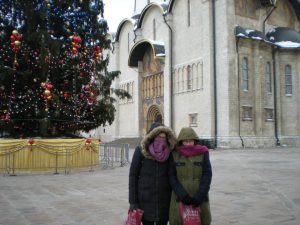 Lilly Millman with her sister in Moscow.

Thesis title: American Dream: On Joining a Hyphenated National Identity as a Russian-American

The experience of being a first-generation Russian-American informed my decision to pursue this project. I realized that I had read so much information about the emotional labor of immigration, but very little about that of being first-generation. Reading Little Failure by Gary Shteyngart helped, too; there were a lot of raw, honest passages in that book that inspired me to dig deeper.

Thesis title: From Dark Worlds to Personal Representation: Analyzing the Social Construction of Addicts in Modern Images of the Opioid Crisis

I came across James Nachtwey’s piece in TIME magazine a little over a year ago, and it was the first piece I’d ever seen that gave such intense exposure to the opioid epidemic. I lost a friend from high school to an opioid overdose, and became interested in the ways people like him and his family were being represented. Nachtwey’s piece made me simultaneously grateful and uneasy, which inspired me to delve deeper into the visual discourse surrounding addicts and their personal struggles.

The other senior honors program students who presented were:
Name: Myles Taylor
Major: Writing, Literature & Publishing
Thesis title: No Words That Are Legal: Queering Language Through the Work of Anne Carson