School of Communication students attended a series of workshops, panels and more during Communication Days on March 20-21, 2019. (Photo by Molly Loughman)

The collective departments of Emerson’s School of Communication merged their multifaceted insights from across the communication field during the first ever Communication Days. Emerson students, faculty and staff, alongside accomplished professionals exchanged interdisciplinary perspectives throughout a two-day series of nearly 40 panel discussions and workshops held March 20-21. 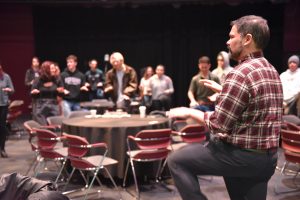 The conference’s opening event, ‘Mindfulness in Communication,’ was led by Nejem Raheem, interim chair of the Marketing Communication department. (Photo by Molly Loughman)

The School’s goal with the inaugural conference was to foster a sense of belonging and community, explained Reis. Aside from a gamut of career readiness workshops, SOC students voiced their thoughts and opinions during the ‘SOC Student Forum’ held with support from the Student Government Association. Other student-led events included a debate with visiting students from Blanquerna University, Emerson’s Academic Partner, about Catalan independence; a panel of Venezuelan Emersonians who offered personal perspectives on the current political and social issues affecting the nation; and another panel entitled ‘Movement Leaders on Campus’ which highlighted students who have made strides on campus with issues including race and the environment.

Sizable venue spaces and classrooms overflowed with curious students to hear communication experts dispense their insights on a plethora of topics including the experience of reporting while female; how augmented reality and virtual reality are being used to communicate social impact via art; gender and its role in politics; how women can empower one another from the perspective of global female leaders; the African-American experience in Major League Baseball after Jackie Robinson broke the color barrier; fostering innovation through digital voice assistant technology; the warring of streaming platforms Netflix and Disney; politics between Spain and Catalunya; civic engagement; along with sports and the politics of protest.

Introduced to the Emerson community last week was the college’s new digital voice assistant, ‘Em – being brought campus by Emerson Launch, the College’s hub for innovation and entrepreneurship. 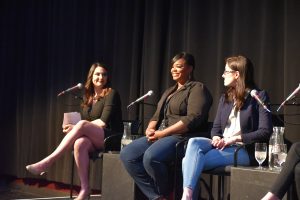 Panelists during the Reporting While Female discussion on March 20. (Photo by Molly Loughman)

Empowering female voices resonated loud and clear inside the Bright Family Screening Room during Wednesday’s final event, ‘Vital Voices: Women Using Their Power to Empower,’ where a panel of women leaders from around the world reflected on their own experiences and obstacles rising up into leadership positions amid their patriarchal surroundings.

Sitting in the front rows before them was a group of 22 women leaders hailing from 17 countries around the world – all influencing the political trajectories of their countries, noted Nelson. As an increasing number of women climb to leadership positions, they are changing public perception of leadership and also power, she added.

“New Zealand is genuinely heartbroken this happened. Prime Minister [Jacinda] Ardern is an exceptional young woman,” said Shipley. “I think the ability to see in a moment how to be a decisive leader, how to be empathetic and wrap yourself around people just broadens that leadership space. I think she has the intellectual capacity and moral authority to at least invite us to argue the line, which is emerging in New Zealand, ‘Where does free speech end and social responsibility begin?’ Jacinda and her generation are taking all we’ve learned and are and making it her own.”

“I don’t think I was intimidated by the job. I thought it was a very important job during a very difficult time and I thought my country deserved it. I’m not going to tell you it was easy, it was not,” said Merino.

“All the firsts they’ve done — it’s just very inspiring. I’m really glad I came out to this event,” she said.

“It’s nice to know women who have accomplished so much and have gone through so much have experienced similar feelings to what I feel,” said Erin Nolan, a journalism senior. “It’s always nice to meet people who reach for the stars and catch some and beyond.”

Sports and the Politics of Protest

Communication Days drew in one last roomful of people inside Emerson’s Jackie Liebergott Black Box Theatre for the closing event, ‘Sports and the Politics of Protest: A Look at Social Change through the Communication of Sport.’ There, the topic was examined through the lenses of former professional athletes and scholars who discussed how sports and athletes can be change agents in social and political activism. Moderated by Communication Studies professor Michael K. Park, the panel featured Dr. Dan Durbin, Director of the Annenberg Institute of Sports, Media & Society, and scholar on the rhetoric of sports, and the social and cultural impact of sports; Nate Boyer, former Green Beret, University of Texas football player, and former Seattle Seahawk; Vern Law, former MLB all-star, Cy Young Award winner; and Emerson Senior Associate Director of Athletics and former Division 1 student athlete at Rutgers University, Stanford Nance.

After initially witnessing one of his praised athletes, NFL quarterback Colin Kaepernick’s first protest against racial injustice by sitting down during the playing of the U.S. national anthem, Boyer, a former U.S. Army Green Beret who served in the military for six years and did multiple tours in Iraq and Afghanistan, admitted he was somewhat offended and decided to write an op-ed in the Army Times which has since gone viral.

It wasn’t until Kaepernick invited Boyer to thoroughly converse in person that Boyer started to have a greater respect for Kaepernick’s mission. “Really it had little to do with the symbols themselves. He just chose that time because it was an impactful time, where he knew people would be listening and it’d give discomfort, and I think that is the purpose of a protest,” said Boyer. Boyer would actually suggest to Kaepernick to take a knee instead of sitting down while the national anthem is played before NFL games.

“I suggested it because it was almost symbolic of a flag at half mast, but also people take a knee to pray, to propose to their wives. In my experience, it’s never really been seen as a form of disrespect in any culture – it’s quite the opposite actually. In football, when a player is injured on the field, everybody takes a knee to pay respect. In Arlington [Cemetery], in the military we take a knee at headstones to pay respect,” said Boyer. “Athletes aren’t robots. Like anyone else, they have very different interests beyond the game. I think the same thing about the veteran community. From the athlete’s standpoint, you do have to understand you’re risking something. That happens in every profession, but if it’s an important cause then it shouldn’t matter. That cause should matter more.”

Colin Kaepernick had a place to say something and he was in a position to say it, so he said it. Boston’s Tea Party was a rebellious act from colonists against the British government, said Durbin.

“How do you talk to the British government? You take their tea. How do you talk to the American people? You take their football – and you put your message on the biggest stage you can,” said Durbin, noting whether you’re for, or against Kaepernick, he had the right to freedom of speech. “As someone who wants to say something about the conditions in the United States, he picked the one spot where he really could. He did the smart thing and picked the stage he had and used that to communicate.”

The last former major leaguer to pitch against Jackie Robinson, Law, 89, recollected on his MLB days during the 1950s when racial tensions were palpable in segregated ballparks and during Law’s team’s travels. Racism back then led his fellow white and black teammates to board in separate hotels.

“That makes a real difference in a ball club, because when a team works together, plays together, sleeps together, I think that’s how the Pirates were able to win the World Series because we pulled for each other, we loved each other. So, it got to the point where we played like a team — because when I first got there, we wasn’t much of a team,” said Law.

When asked by Durbin how both warfare and sports both involve a critical level of trust among both soldiers and players in order to win, Boyer explained that even though you may not always like the person you’re fighting alongside with, the level of trust established during intensive training carries the common mission through on the battlefield.

“That’s one of the problems with our country now is we don’t know each other. We don’t do anything together. We’re stuck on our phones. We don’t communicate — we don’t talk,” said Boyer.

In addition to a string of communication-themed interdisciplinary panel discussions and debates, Communication Days also facilitated half a dozen Career Readiness workshops, offering students a chance to develop a personal strategy to get the jobs they want.