That’s the tagline for the On The Same Page campaign created by two Emerson College classes to crowdsource more than 100 inclusive books to be provided to students of the George H. Conley School in Roslindale, a neighborhood of Boston.

“We are creating a social justice and equity reading area in the Conley School library because 80 percent of the students are people of color, of different languages, abilities, and cultural backgrounds,” said Cathryn Cushner Edelstein, Communication Studies senior executive-in-residence and director of the Nonprofit Communication Management minor. “And library books don’t contain protagonists about families like theirs. And that’s how this campaign was born.”

On The Same Page officially launches April 2, but the Amazon wish list of books has been live for a few weeks. Some of the books on the list include: Mommy’s Khimar by Jamilah Thompkins-Bigelow, illustrated by Ebony Glenn, which is about a young Muslim girl who spends a day wrapped in her mother’s headscarf; Too Many Tamales by Gary Soto, illustrated by Ed Martinez, a “story of a treasure thought to be lost in a batch of tamales” and “a funny attempt by Maria and her cousins to eat their way out of trouble”; and The Bully Blockers: Standing Up for Classmates with Autism by Celeste Shally, illustrated by David Harrington. 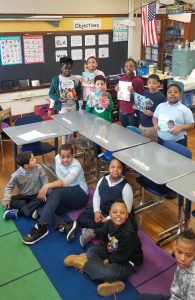 Students of the Conley Elementary School in Roslindale.

Through Edelstein’s Nonprofit Fundraising Campaigns class, and Maria Scott’s Intro to PR class, students created Facebook and Instagram pages for the campaign; created content for social media; designed infographics for flyers and posters; researched for appropriate books to include on the wish list; and examined best methods to make On The Same Page a successful campaign.

“As part of the research team, I’ve also worked on researching relevant Instagram hashtags and compiling statistics to use in our social media content,” said Hannah Choi 20.

Choi said her team learned that “only 13 percent of children’s books published in the last 24 years contain multicultural content” (Lee & Low Books 2017) and “90 percent report that when kids see themselves in books, they are far more likely to be enthusiastic readers.” (Scholastic Blog).

“[Emerson] students also added books to the wish list that dealt with their own identity, gender identification, sexuality, language barriers, and culture,” said Edelstein. “A lot of them saw themselves in this project. And they wish they had books that included them when they were young.” 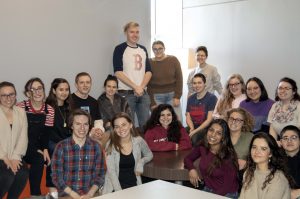 Emerson College students who created the On The Same Page campaign to crowdsource for inclusive books to be gifted to the Conley Elementary School in Roslindale.

The Amazon wish list includes books for students in kindergarten to fifth grade. The Conley School connection came about because former Emerson College teacher Neil Harris is a fifth-grade teacher at the Roslindale school.

While some books have already been delivered to Conley students, Edelstein and her students will also get to see the results of their campaign as they are going to the Conley School on April 25 to read the new books to the students.

“I’ve been really enjoying getting hands-on experience through this campaign because I feel that our class is making a difference in the lives of the students at the George H. Conley School,” said Choi. “Through this project, we are able to shed light on the issue of underrepresentation in books by showcasing the importance of books with diverse characters and content. I’m excited to visit the school [on April 25] to see how our work has made a positive impact!” 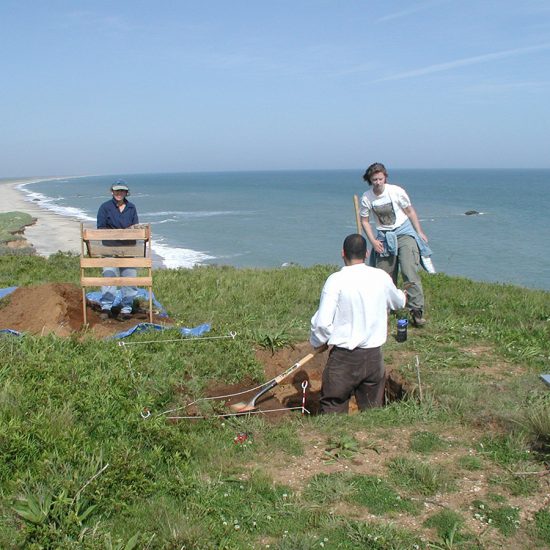