Ivelisse Rodriguez is an alumna of the Master of Fine Arts program in Creative Writing. Earlier this month, she was announced as a finalist for the 2019 PEN/Faulkner Award for Fiction for her first book, Love War Stories. The collection of short stories explores the ways in which Puerto Rican women grapple with the societal expectation that they aspire to “true love” above all else.

Rodriguez has published fiction in the Boston Review, All about Skin: Short Fiction by Women of Color, Obsidian, Kweli, the Bilingual Review, Aster(ix), and other publications. She is the founder and editor of an interview series focused on contemporary Puerto Rican writers in order to highlight the status and the continuity of a Puerto Rican literary tradition from the continental U.S. that spans over a century. The series is published in Centro Voices, the e-magazine of the Center for Puerto Rican Studies at Hunter College. She is currently working on the novel The Last Salsa Singer, about 1970s-era salsa musicians in Puerto Rico. She earned a Ph.D. in English-Creative Writing from the University of Illinois in Chicago. 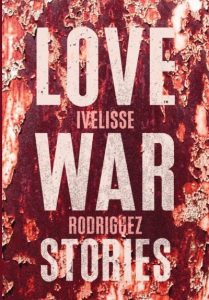 How did you find out about your nomination for the PEN/Faulkner Award? How did you react?

It was the day after the PEN Literary Awards Ceremony when I get this mysterious email about somebody from the PEN/Faulkner Foundation wanting to talk to me. I thought maybe somebody flaked on a panel and they needed me to fill in or something. And so I’m driving to work, and I speak to the director of the awards program at PEN/Faulkner, and she tells me my book is a finalist.

I was just totally blown away. I must’ve even said I was going to cry over the phone.

It was pretty unexpected because awards season started in December and I didn’t make any of those lists, which I was kind of bummed about. The book has also made a lot of must-read book lists and such, but it’s not selling all that well. So this really came as a surprise. I hate platitudes and things like that, but it’s pretty amazing what’s happening right now.

Can you tell us a little more about Love War Stories and what inspired you to write it?

Love War Stories is a collection of short stories about the ways love can be detrimental to women. Women are often fed these narratives that tell them to pursue love at all costs, and this book looks at the way that those narratives can damage women.

One of the stories, “Light in the Sky,” chronicles a little bit of a trip my mother and I took to Puerto Rico. I must have been around 30, and all the women I would meet would be like, “When are you going to get married and have kids?” and I would say, “Never!” and they’d be like, “Good, don’t do it!”

It was just so interesting that they sort of followed the cultural line on the surface level, asked some questions they were supposed to ask, but then, underneath, they’re sort of like, “Don’t do it, it’s not the greatest thing.” So I wanted to speak to that push-pull that I definitely see in Puerto Rican culture and other Latino cultures. There’s this expectation that heterosexual women are supposed to love men, even if these men are going to treat these women badly.

When did you know you wanted to become a fiction writer?

I think it was in fifth grade, and the entire school had to write a story in a single paragraph. I remember that I used the word “grotesque” in my story, because I was a little nerd and I would look up words I didn’t know. And that’s all I remember about what I wrote.

After we submitted our stories, the principal came to my homeroom and said I wrote the best story and gave me a chocolate bar. And I think it was at that moment I decided to become a writer.

From there, I wrote some bad poetry in high school, which I think a lot of aspiring writers do. And then I went to Columbia for undergrad and took a couple of creative writing classes there, but didn’t really have my footing yet. And then, for whatever reason, I decided to apply to MFA programs, and ended up getting into Emerson, which I’m so thankful for.

What role did Emerson play in your writing journey?

I think Emerson is where I really learned the fundamentals of how to write. [Professor Emeritus] DeWitt Henry and [Senior Distinguished Writer-in-Residence] Jessica Treadway were on my thesis committee, so I worked pretty closely with them.

Jessica actually sent me an email recently about the PEN/Faulkner Award, and I had to thank her because when I look back now, I feel like I was really at the beginning of learning how to write while I was at Emerson. I feel like DeWitt and Jessica were amazing in nurturing that.

Love War Stories is actually a revision of the thesis, and later dissertation, that started as my Emerson application.

Do you have any advice for young writers?

I think ultimately, you have to write the book that really captures what it is that you want to capture in the world. When I’m teaching my undergrads, I can always tell when they’re writing in a voice or in a style that they think they’re supposed to. It comes off as really inauthentic.

As a writer myself, one of the things I was always concerned about was, “Is anyone going to care about the Puerto Rican girls in this book?” I think that’s a question that a lot of MFA students of color might be grappling with. And the truth is I can’t say for certain whether people will care — I think it’s pretty hit-or-miss. But like I said before, writing about staying true to yourself and telling the story you want to tell.

The winner of the PEN/Faulkner award will be announced on Saturday, May 4, at the Award’s 39th annual ceremony. Love War Stories is available online and in stores.

Alumni, School of the Arts, Writing Literature and Publishing