There is no doubt Emerson College alumni had their hands involved in Oscar nominated movies, including three who brought Spider-Man an Oscar and the beloved (and returned) Mary Poppins a nomination. 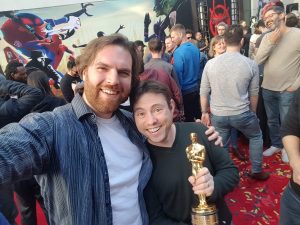 Andy Leviton ’06 worked as an associate editor for Spider-Man: Into the Spider-Verse, which won Best Animated Feature Film. Leviton spent three years working on the film, and described being part of an Oscar Award winning movie as “unreal.”

“I certainly knew that the visual style alone was going to be groundbreaking in ways people never imagined. And I always felt like we were making a pretty good movie beneath all that style,” said Leviton.

Leviton said he took first passes at cutting scenes, recorded dialogue (even got a cast credit for voicing Police Officer #5) and worked one-on-one with the directors, producers, and writers in his edit suite.

“I collaborated with them directly to fine tune sequences but we also used a lot of our time to bounce new ideas off one another,” Leviton said. “They would pitch ideas to me and I would pitch ideas to them. I had never worked in an environment where ideas could come from anyone and anywhere like that. I am proud to say that I actually wrote dialogue and created entire beats for some key moments in the film. Someone in my position doesn’t usually get to have that kind of creative input.”

Leviton’s previous credited works include Hotel Transylvania, Cloudy with a Chance of Meatballs, and others.

Scott Whitman ’76, with Marc Shaiman, was nominated for Best Original Song for “The Place Where Lost Things Go” from Mary Poppins Returns. It was Whitman’s first Oscar nomination. Whitman has previously been nominated for three Emmy Awards, a Grammy Award, as well as numerous other awards.

Whitman’s previous credited works include The Cat in the Hat, When Harry Met Sally and he wrote the lyrics to the Tony Award winning play Hairspray, and more.