Fifty years ago, the student group EBONI (Emerson’s Black Organization with Natural Interests) was formed. Led by Emerson senior, Mooneyene Jackson-Amis, third from left, the group presented a list of 10 demands to President Chapin, left. Tensions rose among students, faculty, and administrators until most of the demands were met. Photo/Emerson College Archives & Special Collections

Fifty years after its inception, current and alumni members of EBONI are reflecting on the role the organization has played in making Emerson College more diverse, inclusive, and more responsive to the interests and needs of its growing African-American community. 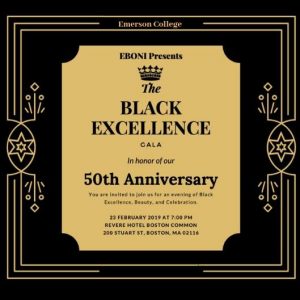 EBONI’s (Emerson’s Black Organization with Natural Interests) current members will celebrate the organization’s 50th anniversary with the Emerson community and EBONI alumni at a formal dress gala on February 23.

“It’s a celebration of what EBONI has done for the past 50 years, whether it be to increase the number of black students on campus, be a voice in campus, or simply being a safe space for blacks on campus,” said current EBONI President Jonas Spencer ’19. “It’s about every single black student who walked across the Emerson campus and making sure their voices had recognition.”

The gala will include dinner and dancing with a program honoring EBONI’s past, present, and future.

For EBONI alumni, it will be a time to reflect on the importance of the organization.

“I think one of the things that is important to mention is that I was a member of a large cohort of students, not just at Emerson but across the country, who were permitted to attend predominantly white institutions because of legislation that passed. I’m a product of affirmative action,” said Alyce Myatt ’74.

“That doesn’t mean that we only participated in those productions,” Myatt said. “One of the great things about Emerson is that if you had an idea you could do it, no matter what it was, you got support from the school. But being able to have more than one black person audition for something was monumental.”

In its inaugural year, EBONI provided 10 demands that included increasing the number of black students admitted in future classes, establishing fellowships for black students, and requiring that all students, regardless of race or ethnicity, take at least one course on black history or culture.

Jennifer Cover Payne ’71, who was one of the students who presented the demands to the administration, said that English teacher Calvin Forbes introduced her to African-American literature that she would later perform around the country at colleges and universities around the country. Those trips were sponsored by Emerson’s Speech Department as she traveled with Professor Kenneth Crannell. She went on to teach Oral Interpretation of African-American Literature as a graduate student.

In addition, Emerson created a cultural center, which became a haven and residence for many African-American students.

Jacquie Gales Webb ’77 compared EBONI to sororities and fraternities, as members feel like family to each other by providing support, encouragement and emotional release.

“As a result, Emerson has successful African-American alumni ranging from CEOs to Ambassadors. As an African-American producer, director, and talent, my experiences in EBONI contributed to much of the work I have accomplished today,” said Webb, a Peabody Award-winning producer who was inducted into the WERS Hall of Fame in 2014.

As a witness of Emerson before and after EBONI, Payne saw the organization’s effect on the college.

“The change from my freshman year, when I was the only African-American student in a dorm of 110 girls, taking classes from a totally white faculty, to my senior year when African-American students were visible on campus, as well as, a more diverse faculty and administration — I truly believe that EBONI opened a door to cultural understanding for those students and faculty members who wanted to enter it,” said Payne.

Charvelle Holder-Dobard ’13, the current president of the EBONI Alumni Association, proudly stated the organization’s importance to Emerson’s black students and the college’s community as a whole.

“To me, EBONI’s 50th anniversary is a major milestone,” said Holder-Dobard. “This organization has been the home away from home for many black students, as they enter their hectic college years. EBONI has meant community, love, safety, unity, and much more to those of us who have come through as members. Many of our EBONI friends become our friends for life, as evident at our EBONI Alumni events. It truly is a family, and we’re so grateful for the opportunities to celebrate this organization that has meant so much for us, this year.”

The gala will be on Saturday, February 23, 7 pm at the Revere Hotel. There will be a $10 admission charge. Please click here to purchase tickets in advance.

EBONI’s Alumni Association will hold its own 50th anniversary celebration during Alumni Weekend, May 31-June 2.

After a slight hiatus, EBONI brought back its fashion show in 2018. Spencer said the previous fashion show incarnations featured themes, and this new version is about spotlighting Boston area black fashion designers.

A Call for Diversity

On February 3, EBONI hosted A Call for Diversity in the Bill Bordy Theater, which featured a keynote address by activist April Reign, who in 2015, created the hashtag #OscarsSoWhite. There was a Q&A session with Reign after she spoke, followed by opportunities to talk with her in a non-formal setting.

#OscarsSoWhite they asked to touch my hair. 😒

“I saw the hashtag and I thought, that’s what we need, so why not bring her here?” said Spencer. “I’ve seen the Oscars try to push for more diversity in some ways, and in some ways they’ve pushed back against it. It’s opened a lot of eyes about films, whether it’s white-washed films, actors playing roles meant for trans people or [people with disabilities]. It’s called for more films to get more of a spotlight and put focus on films to get proper recognition.”