Ten students in Emerson College’s MFA film program flew to Park City, Utah, on Thursday for an opportunity to connect with industry professionals at the 2019 Sundance Film Festival, an annual gathering of “storytellers and audiences seeking new voices”.

Anna Feder, Visual and Media Arts director of programming, has been leading the troupe of students to Park City for the past five years. Feder is heavily involved in the trip’s planning process, including the organization morning “breakfast talks,” which allowed for informal conversations between the MFA students and Emerson alumni in the industry.

Hosting the breakfast talks were Cummings and Thunder Road producer Ben Weissner ’08, and Asperger’s Are Us filmmaker Alex Lehmann ’04 and producer Sean Bradley ’04.

Feder feels that the breakfast talks are “something that would really be beneficial to students,” and knows the importance of having direct contact with professionals. “It’s an opportunity to see what’s happening [in the industry],” Feder said. 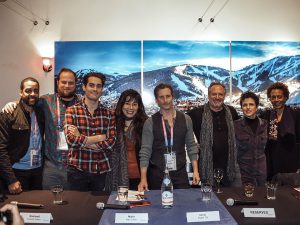 The college’s festival attendees were selected from a pool of about 25 applicants and are attending with goals of networking with other filmmakers, getting creative inspiration, and gaining mainstream festival experience, according to attendees.

Yi-Chi Chen, one of the MFA student participants, explores human interest subjects in her work. Her most recent film, We Need to Talk About the Ring, focuses on the conflict between traditional Asian values and the recent legalization of LGBTQ marriage in Taiwan, according to Chen.

“Being an independent filmmaker who wants to tell a story by digging into people’s minds is my dream,” Chen explained. “participating in the Sundance Film Festival can help me explore my idea for my thesis work and seek potential connections with other filmmakers who also help underprivileged minority groups to be heard.”

Matt Szymanowski, another attendee, recognizes this opportunity as something he’s always dreamed of.

“It’s an honor to be here with Emerson,” Symanowski said.

Szymanowski produces esports content and has been writing/directing his second feature film, Glorious Empire. He hopes to utilize the Sundance trip to meet filmmakers, make meaningful connections, and, of course, watch films.

“I’ve chosen this path as an indie filmmaker and I’d mostly like to meet people who are also committed to this, people I’d love to potentially collaborate with one day,” Symanowski said.

Students and faculty are attending the festival from Jan. 24-30.

Graduate and Professional StudiesSchool of the ArtsStudentsVisual and Media Arts