Native American performers and educators from around New England brought a celebration of song, dance, and cultural identity to Emerson College as part of International Education Week. Performers, including Wampanoag activist/educator Annawon Weeden, center, introduced the history and purpose of dances and songs from Native American nations. Photo/Derek Palmer

Tribal dances and songs, a review of historical and current events, and a fall harvest meal, were all part of a Native American Cultures Celebration held at the Bill Bordy Theater on Friday, November 16.

“The idea today is to talk about diversity,” said Jeremy Heflin, associate director of English Language Learning, who has organized the event for several years. “Native Americans still exist. Native American cultures still partake in society and are diverse.

“When it comes to Native American cultures, it frequently ends up as a myth, as one culture,” said Heflin, who is of Cherokee descent. 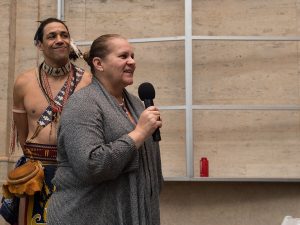 Jessie Little Doe Baird, vice chair of the Mashpee Wampanoag Tribal Council and a MacArthur Fellow, spoke about the history of the tribe that dates back 12,000 years, and discussed land-in-trust issues affecting modern Native American communities.

“I think there are times in humanity we could be happy with the status quo,” said Baird, who comes from a line of women chiefs. “Many of us will not see that in our lifetime.”

Baird spoke of the historical inequities faced by Native Americans — forced off their land, forced to become American citizens and pay taxes, having their children taken from them “to become less Indian” — and the current fight with the federal government over control of their land.

“The land trust gave us jurisdiction,” Baird said. “We were able to have our own police officers by tribal policing. We were able to open schools and teach our language to our children.”

But now the current administration is trying to remove the Wampanoag’s land trust. Baird said there are 127 tribes recognized nationally. “If they [revoke the trust for the] Mashpee, then they’ll go after the other 126,” she said.

Hearing about the plight of the Wampanoag resonated with students like Lauren Everheart-Deckard ’22, a creative writing major. “It was interesting learning about the Mashpee. It’s upsetting. It was cool to learn about a culture we don’t normally hear about and learn about land sovereignty.”

Towards the end of the harvest luncheon featuring native food, including duck, squash, Brussels sprouts and apple pies, attendees were treated to dance and drum performances led and narrated by Wampanoag activist and educator Annawon Weeden.

An alligator dance and a duck hunt dance were followed by a Q&A session with Weeden, who explained the significance of the dances.

Baird closed the event with a message of thanks and being “peaceful when you leave.”

“It’s interesting as an international student,” said Qingyuan Wu ’22, a Visual and Media Arts major.  “It’s good to know about other cultures. It gives us an idea of Native American cultures living in their own environments.” 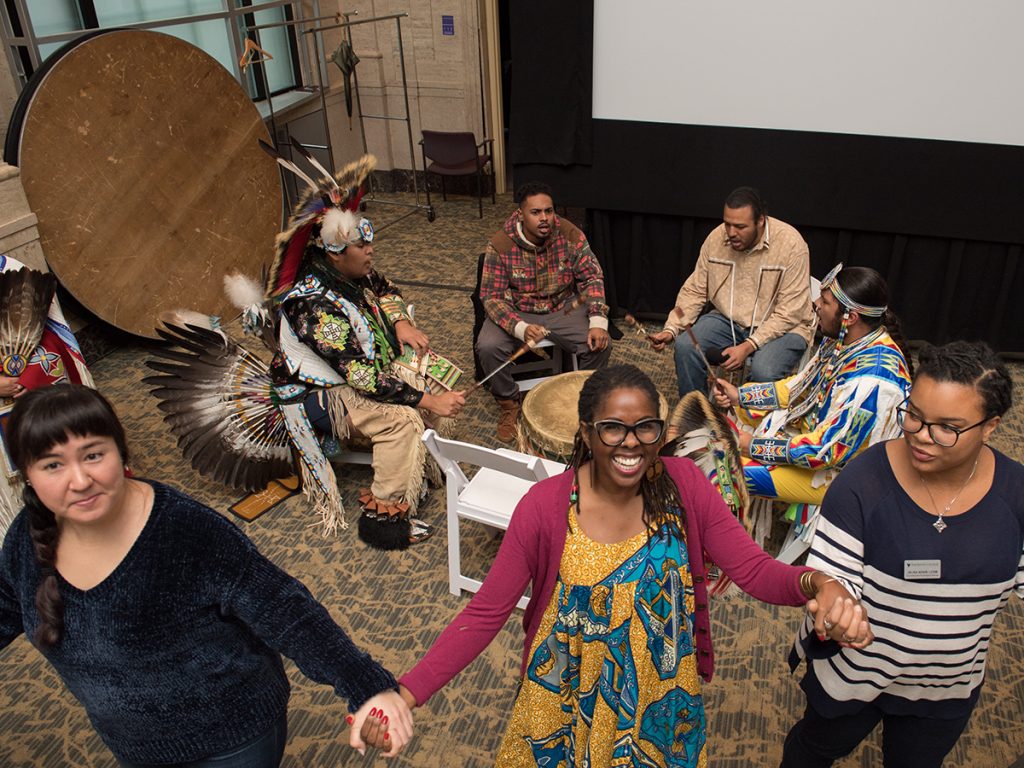 Participants of the Native American Cultural Celebration were encouraged to dance. Photo/Derek Palmer

Debating the Pros and Cons of Virtual Forensics