Shraddha (Faith), a 30-minute narrative film, is about a disciple of a guru who has a crisis of faith. It was selected from among more than 65 films representing nearly 30 countries in North America, South America, Europe, Asia, and Australia. 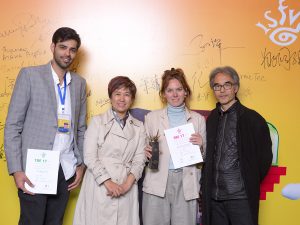 Padhye said originally, the screenplay for Shraddha was much more a critique of faith, a result, he thinks, of having grown up in a fairly religious family. But prior to filming last summer, Padhye spent a month in an ashram in North India, and followed a guru, where he began to understand his mother’s faith.

“When you experience something firsthand, and see hundreds of thousands of people follow this guy, and there’s some sort of gravitas with this guy, that helped me understand,” Padhye. “And that helped me make a more well-rounded film.

His fellow filmmakers clearly responded to his idea, and honored him with an audience award.

“The International Student Film and Video Festival is one of the biggest (if not the biggest) student film festival in the world, and the Beijing Film Academy (BFA) is China’s best film school,” said Visual and Media Arts Chair Brooke Knight. “This is a huge honor for Jasraj and for the College!

“I traveled to the festival a few years ago, and I was impressed by its size, the quality of the work, and the professionalism with which it was run. We are very pleased to have a relationship with BFA to send one of our students to the festival every year.”

Padhye said the nine days he spent in China was an amazing experience, where he got to meet and network with filmmakers from the United Kingdom, France, Poland, Germany, Israel, Iran, and other nations. 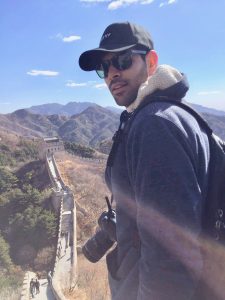 “They will be filmmakers in the industry if all things go right … those are basically your future colleagues,” he said. “I know people from [practically] every country. That’s invaluable.”

Now that he has his Emerson degree, Padhye is in Los Angeles, where he’s submitting Shraddha to festivals (including Sundance) and working on two projects. One is a screenplay for a science fiction trilogy about space colonization; the other is a television pilot about a doctor in suburban LA who makes a living prescribing marijuana to people until it’s legalized for everyone and he has to change his business model.

“I like to make stories,” Padhye said. “I’m not happy just writing stories, I want to do something with those stories.”

Statement from the College Regarding #ESOCWeekOfAction