Creating Space for Writers of Color

Rukhsar Palla is a founding member of Writers of Color. Courtesy photo

Sometime before I decided to apply to Emerson’s WLP graduate program, I spent two weeks in Senegal during my undergraduate career. In contrast to my time in Grenoble and Seattle prior to this trip, I was surrounded by folks of color, and by Muslims.

In those two weeks, just by basking in familiarity, I reflected a lot on my personal reading and writing. I noticed that my reading list had no authors of color on it, besides the occasional Khaled Hosseini novel. I wondered which was to blame; my upbringing or the surrounding society? The Pakistani Muslim woman of color I so adamantly portrayed in all my encounters had somehow flitted away in all of my writing. My education, so transformational, had taught me to prioritize Romeo and Juliet over Laila Majnu. And though some will argue that these zealous love stories are all essentially the same, I argue that they are not. One tells the story of two people of color, unknown to most, while the other is popularized and adopted into the style of a majority of today’s artists. The history of my people is a mystery to many including myself, and there is something extremely unsettling about this.

So when I came to Emerson College’s open house in April of 2017, I had high standards for the program. I wanted to cultivate my collection of short stories in a place that would welcome me with open arms. And though I had little idea about its diversity resources, I immediately fell in love with WLP. I remember feeling welcomed by all of the faculty, and still remember sitting excitedly in a Walker classroom listening to Jabari Asim and Maria Koundoura speak. The promise of classes such as travel literature and cultural translation fell in line with my personal goal: to write authentically.

What became clear to me early on in my Emerson career were two things. The first, was that though there were some resources for diversity inclusion on campus, there was no established place for graduate students of color in the WLP program to process their experiences. And the second, was that a majority of the faculty and staff at Emerson College were more than willing to support this initiative. As a result, myself and a few other first year students formed a group for Writers of Color. 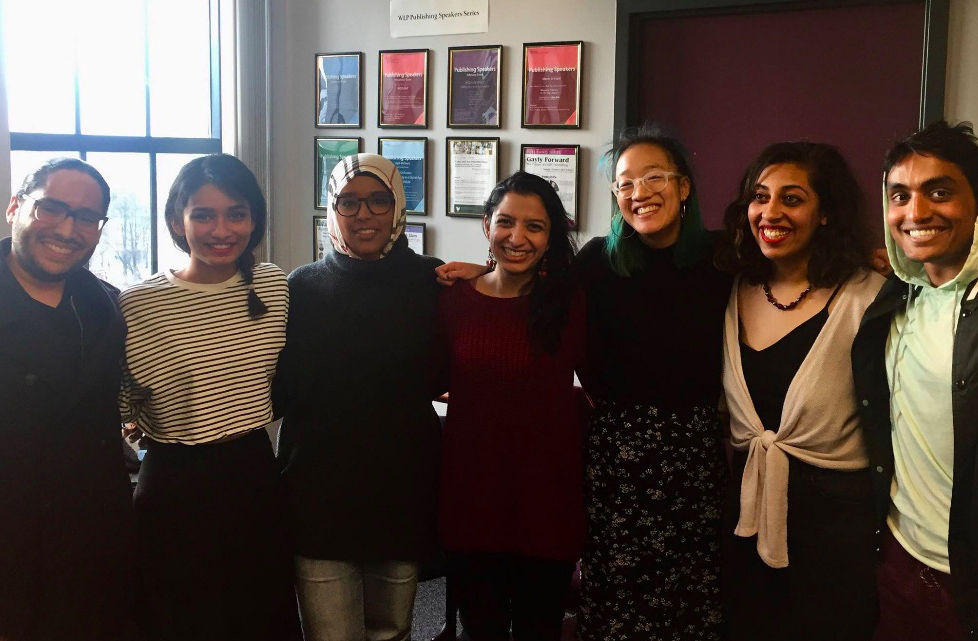 At first, we were simply brainstorming the aims of our group. We met on Sundays and imagined a space where we could critique and edit each others’ writing with less anxiety, less hesitation, and less judgement. This however, quickly transformed into a weekly opportunity to talk about what went on in our classes. Many of us felt silenced, stepped on, or targeted at various points in our workshops. I realized that before we could trade manuscripts with one another, we had to heal. Above all else, we needed a space to process our frustration.

When we checked in with our advisor, Maria Koundoura, she suggested speaking with the faculty about our concerns with the program. After reconvening with the group, we created a list of our needs, and began an ongoing discussion on diversity inclusion at one of the faculty meetings. Prerna Somani, Harini Rajagopalan, Khanh San Pham, and I asked professors in writing and publishing if they had plans for handling microaggressions in the classroom, if they assumed/or had students who assumed themselves to be the primary audience of a text, etc. This conversation was a turning point for our group. It kickstarted our group’s constitution, and ultimately it strengthened my relationship with a number of my professors. Yes, there is a lot of work that needs to be done, but for the first time, we became visible to all of the faculty as a collective.

Following this meeting, we organized an open mic for writers of color to perform, and invited our allies to watch. Many of us were astonished by the turnout; the WLP lounge was crowded with friends and peers from all of our classes. This event not only reassured me of the support system surrounding us, but it also motivated me to continue working to bridge the gap between students of color and the systemic oppression historically embedded in MFA programs. As a group, we continue to meet on Sundays and are taking the last steps in becoming an official graduate student organization. We plan on hosting more open mics, continuing with our weekly meetings, and above all else, healing as a collective group.

To get in contact with the Writers of Color at Emerson, please e-mail me at rukhsar_palla@emerson.edu or our Social Media Representative, Harini, at harini_rajagopalan@emerson.edu. We meet most Sundays at 3 p.m in Ansin at the 12th floor conference room. To receive updates, please request to join our Facebook group Writers of Color @Emerson.

Rukhsar Palla is currently a graduate student in Emerson College’s MFA Fiction program. She graduated from Seattle University in 2017 as a Sullivan Scholar, where she completed an English/Creative Writing major and a French minor. Her poems have been published in Fragments, The Cape Rock, Straight Forward Poetry and other literary magazines and journals. She is currently the fiction editor of Redivider, Emerson College’s literary publication, as well as the creative nonfiction editor at Crab Creek Review, a Washington-based literary journal. She is also the founder and president of the Writers of Color graduate student organization at Emerson College, where she is working on voicing the collective realities and injustices people of color face, through collective healing and writing-related pursuits. She hopes to graduate from Emerson College in Spring 2019 with a collection of short stories vocalizing some of the experiences of Pakistani Muslim women globally. In her spare time, you can find her sleeping under her pink rose tapestry or making chai in her kitchen.

Information for Students About Hometown News