Every two years, Emerson’s Costume Shop holds a special sale where costumes from the previous two years’ shows are made available for purchase. Per the tradition, the sale is held a few weeks before Halloween, making it the perfect place for to prepare for the holiday.

Emerson students were eager to seize the opportunity.

“We were still setting up around noon, and the place was full by 12:04,” said Julia Getz ’19, the Costume Shop’s stockroom manager and organizer of the event. 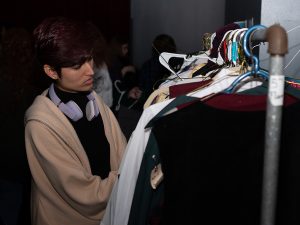 A shopper goes through a rack of costumes.

Many of the costumes for sale were handmade by professional costume constructors, as well as Emerson students majoring in costume technology. As such, the one-of-a-kind pieces generated nostalgia for Getz.

“I feel very attached to a lot of these items,” she said. “But having met all of the people that are picking them out, I know that they’re going to a good home. It’s almost like an adoption!”

The costumes were previously worn in shows ranging from Guys and Dolls to Richard III. As such, students were pleased to find a wide variety of items to be worn for Halloween or simply as everyday wear.

Thea McRae ’18 was among the students that will be repurposing a piece for her Halloween costume.

“I’m going as Scary Spice, and I found a leopard print silk robe that will be perfect for it,” she said. “Unfortunately, I’ll be in the midst of tech week for a show during Halloween, but I plan on arriving at rehearsal in costume.” 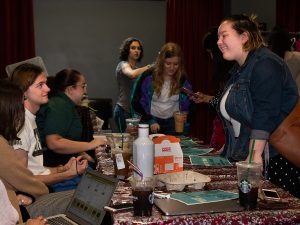 The costumes will not only be recycled for Halloween, but also for new shows. Former theatre students Sloth Levine ’16 and Katie Grindeland ’16 stopped by the sale to pick out costumes for their upcoming production of Nosferatu, the Vampyr. The show is a queer adaptation of a classic vampire tale, and will feature mostly gender non-binary actors.

“The costumes for our show will be a combination of modern dress and the classic 19th-century vampire aesthetic,” said Levine. “A lot of the costumes here are just what we’re looking for.”

If you’re curious to see how the costumes turned out and want to support queer theatre, Nosferatu, the Vampyr will be showing at the Dorothy and Charles Mosesian Center for the Arts, 321 Arsenal Street, Watertown, on Halloween at 7:30 and 9:30 pm.

As for the rest of the costumes, they may just be on display all over campus on the night of October 31.

Performing ArtsSchool of the ArtsStudents