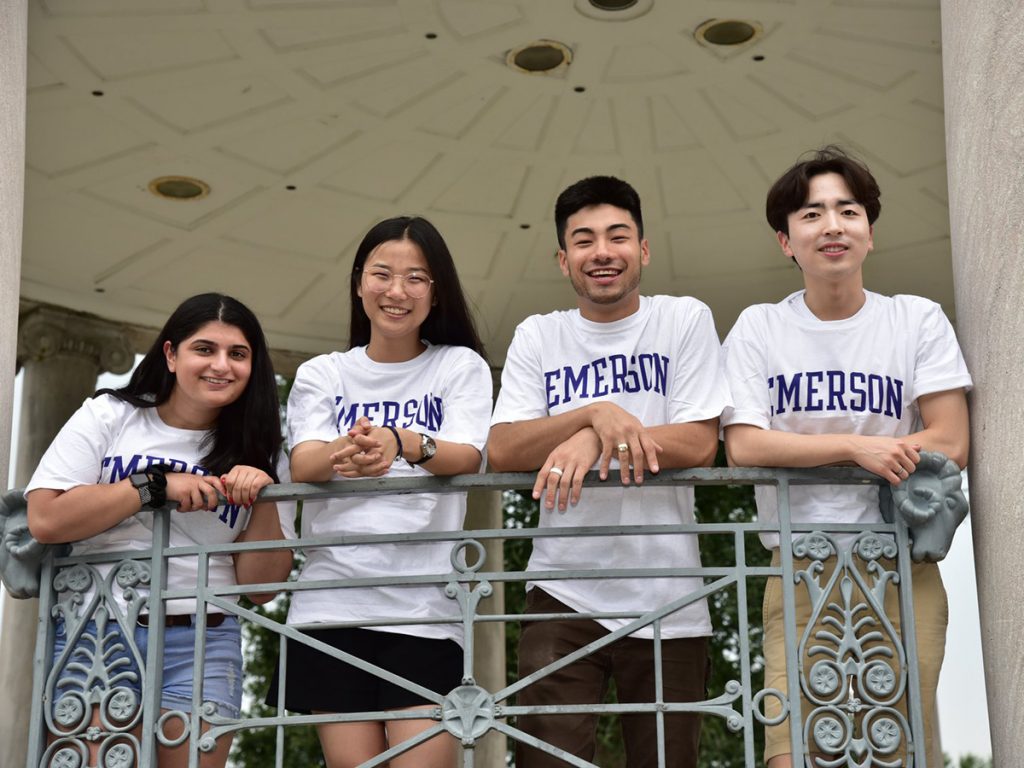 Navigating your first year at college can be difficult for anyone, and it can be more arduous for international students who often face language barriers, cultural differences, and homesickness.

“As a person who lived on campus as a freshman, I know it can be a little different since you’re coming from a different culture, country, and community,” said Jae Suk Lee ’21, one of the four mentors. Originally from Seoul, South Korea, Lee attended high school in Maryland, and said the quartet offers a support system in many ways to international students.

The new program was launched by the Office of Housing and Residential Life (OHRL), in partnership with the Office of International Student Affairs (OISA).

The program kicked off with an orientation for international students before the weeklong orientation for all first-year students, said Director of International Student Affairs Andrea Popa. Mentors offered an alternative meet-up for students who came without families during Bring Your Family/Friends Lunch; helped lead discussions on topics including identity, making connections, gender, and Emerson 101; mingled with new students at social events; and connected them to resources.

After the initial orientation events, the mentors said they are offering a less formal program while staying in touch with all of their mentees, and letting the students approach them if they want guidance.

Students seek a wide range for help on classes, culture and cuisines.

“Sometimes they’re asking about resources, sometimes about [Emerson Counseling and Psychological Services], or they ask about the org fair – that was a big thing we were asked about,” said Rinaldi, who grew up in Connecticut and is Japanese and Italian. “Sometimes it’s banal stuff like, ‘How do I open the combination for my mail?’ Sometimes it’s a personal thing after you’ve already connected with them.”

“During my first year, I was overwhelmed because it was my first time to study abroad, so I met so many difficulties,” said Li, a Journalism major. “I know how international students may feel during their first year. When I was a freshman, I wish there were someone to lead me, and to share my troubles with, and now there’s this opportunity for me to be an international peer mentor.”

Li said she’s also been able to provide advice on a phone scam targeting international students. “I told them it’s a scam, and the government won’t call them and their bank won’t call them. They’ll contact you in other ways.”

The Emerson College Police Department (ECPD) is aware of the scam and sent out an alert to the community warning students of the phony phone calls.

First-year student Sisel Gelman Montero said Rinaldi also provided info on what precautions to take while walking around at night.

“He showed me how to ask ECPD for help and went beyond his duties as a peer mentor by offering to walk with me,” said Montero, who is from Mexico City. “As he told me later, his approach to being a peer mentor isn’t that we’re children under his protection, but that we’re his friends. Friends take care of each other. Friends are generous with each other. The program has given me a kind friend, and that is priceless when establishing oneself in a home.”

Mentors also provide insight into classes they’ve taken, as well as professors. Some mentees have told Li they don’t feel comfortable in some classes because English isn’t their first language. Li advises the students to talk to their professors and to not be afraid if their English is not as good as other students.

Peer mentors may also get involved with first-year students classwork when called upon. Tingting Jiang ’23 utilized a peer mentor in a class video project about providing suggestions for international students who want to study abroad.

One cultural integration the mentors partook in was celebrating the Mid-Autumn Festival by providing moon cakes to international students.

“We made little notes and gave each international student living in the Little Building a moon cake,” said Lee. “People from East Asian countries really appreciated it. We wrote individual notes and they were touched by it.”

Lee said the celebration was also a teaching experience for people from different cultures, no matter where they grew up. “It was a great opportunity for me to explain it and to learn about different cultures.”

Li said last year she missed celebrating the festival, as it’s very much a family reunion back in China.

“All my friends in China were with their families. I was alone. This year I felt like if I could do something, especially for those who celebrate the moon cake festival, it could relieve the homesickness,” said Li.

Moon cakes are not the only food that the mentors have shared with their mentees.

Along with, ‘Where is the closest Target?’, students want to know where to get the best pizza or burrito.

“For good burritos I tell them to go to Tenoch. And they ask, ‘Why would I go to Little Italy in the North End for a burrito? Would I go to Chinatown for a slice of pizza?’ I brought a mentee up there to show them. It was a little field trip for us to go to the North End and get burritos. It was a hit,” said Rinaldi.

Along with public safety advice, class recommendations, and restaurant reviews, the peer mentors have provided a very simple, but greatly appreciated aspect to first-year students.

“It’s a small thing, but having someone give a friendly smile in the hallway is really welcoming,” said Grace Hwang ’23. “They’ve also sat down with me to have lunch and dinner, which was a great opportunity for me to get to know them better. I feel like I have a strong support system.”