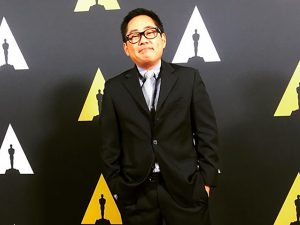 Ed Lee‘s own experiences growing up as Korean American in New Jersey during the 1980s is the inspiration for his upcoming short film Becoming Eddie that recently spotlighted by Deadline.com.

“I wanted to capture that feeling of being in-between — that Asian Americans are expected to assimilate as much as possible, but still often considered foreigners by other Americans,” said Lee, Assistant Professor in VMA and the Comedic Arts program. “The way I dealt with that as a kid was through popular culture, and especially the huge comedians of the 80s: Eddie Murphy, Robin Williams, and George Carlin.” 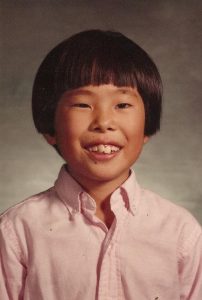 In Becoming Eddie that translated to the protagonist, an 11-year-old Asian American boy, who makes a wish to be as popular as his favorite standup comedian. He wakes up with the voice of that comedian, and has to “accept himself as he is in order to regain his voice,” said Lee.

Lee, whose credits include being a staff writer for The Drew Carey Show and Are You There, Chelsea?, is teaming up with Andi Mack star Lilan Bowden, who is directing the comedy short. Helen Hong of The Thundermans, will co-produce and star along with Charles Kim, of Grace & Frankie and Crazy Ex-Girlfriend. Joyce Liu-Countryman, producer of the award-winning feature Eat With Me, will produce the short. Lindsay Beamish, Assistant Professor of Performing Arts, is also co-starring in the film.

Bowden and Lee are currently leading a fundraising campaign for the project.

Lee spoke to Emerson Today about why he thinks the topic of Asian American assimilation has become popular in recent years with television shows like Andi Mack and Fresh Off the Boat.

“I think the recent popularity of AAPI (Asian American and Pacific Islanders) voices has a lot of different causes. The wave of Asian immigration to the US in the ’70s means that the first Asian Americans born during that wave are now matured and having kids of their own. So the market for AAPI stories is bigger, and there are more AAPI storytellers working in media. When I first began working in television, there were almost no Asian American comedy writers and now, while it’s not usual, it’s not so unexpected to see,” said Lee. 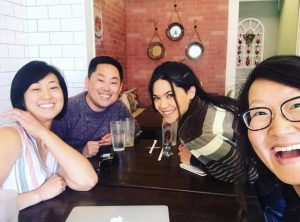 Lee said growing up the only Asians he saw on TV were George Takei, Jack Soo, and the extras on M*A*S*H. But Asian Americans are more visible in the media these days, such as Bowden, who just finished the finale of Disney’s Andi Mack, which featured a large Asian American cast.

“On a larger level, many people from underrepresented groups are reclaiming the power to tell our own stories. My short could have been filmed by almost anyone, but we have so many specifics that can only be told correctly by Asian Americans who understand the shorthand of growing up Asian American,” said Lee.
Post Views: 756

FacultySchool of CommunicationVisual and Media Arts