Jonathan Daniels found himself in an Engagement Lab classroom one day this spring, doing improv skits about preparing for a job interview and writing his ideal support systems on sticky notes.

Daniels, a Lawrence, Massachusetts, resident who was released from prison seven years ago, was helping students in Professor Eric Gordon’s Participatory Design and Research class with an initiative to raise awareness of the challenges that returning citizens face when they look for work, create a workshop that will support formerly incarcerated people, and give them tools to search for jobs. He was joined by other returning citizens – both men and women – as well as re-entry coaches and community advocates.

The diversity of the group, as well as the types of exercises and questions the students asked, boded well for an end result that truly helps support people like him, Daniels said.

“My biggest takeaway from the whole thing is the community, and seeing young potential professionals being involved in a … subject like this, that’s big,” he said. “That’s where it’s got to start, that’s where it’s going to make a change.” 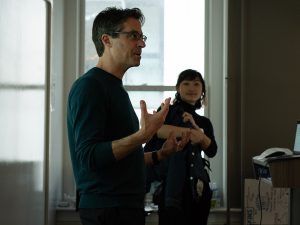 Gordon; his co-instructor, Melissa Teng, MA ’18; and their students would say that for the project to make a change, it’s got to start with the people who it’s being designed to help.

Through research, storytelling, and co-design activities with the group, the class – in collaboration with Boston’s Office of Returning Citizens — produced Don’tOverlookMe, a toolkit for returning citizens and potential employers, available online. It currently focuses on employment, with the goal of “reimagin[ing] the resume as an opportunity to destigmatize and empower returning citizens.” The toolkit combines a short video for potential employers, a printable workshop facilitation guide for building soft skills in returning citizens, and a branding guide for future expansions of Don’tOverlookMe.

“I think we realized … how frustrating the issue of reentry is, just because it’s such a systemic issue,” Bella Bennett ’19 said of the class’s work with the returning citizens.

When a person is released from prison, “they get shown to the door. And then they’re on their own,” Kevin Sibley, director of the Office of Returning Citizens said. In an attempt to counteract that, the City of Boston in November 2017 created Sibley’s office, which is dedicated to helping formerly incarcerated men and women reenter society and get back on their feet.

“We were looking to make a connection with Eric’s class, with the youth of today creating a format where returning citizens can tell their story, [they] can begin to dispel the myth of what it means to be incarcerated and released into American society,” Sibley said.

Preparing for Release with Virtual Reality 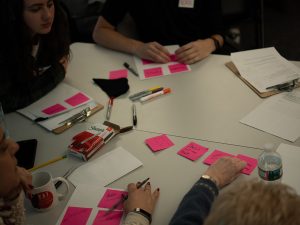 Participants write down types of support during a co-design workshop. Photo/Alex Kuelling ’22

For her master’s thesis, Teng worked with the Massachusetts Department of Correction (DOC) on a virtual reality (VR) immersive video pilot program, which launched in April and was supported by Microsoft’s civic technology initiative. It also won Teng a President’s Citation at May 12’s Commencement Ceremony.

The immersive videos, developed with alumnus VR filmmaker Barry Pousman ’06, were designed with women incarcerated at South Middlesex Correctional Center, a minimum security/pre-release prison in Framingham, Massachusetts, as well as recently released women and men and support personnel from the DOC.

“Unlike existing VR exposure-based tools, we took the stance that immersive VR meant to help someone recover can’t be created for incarcerated and formerly incarcerated folks without their direct involvement in the design process,” Teng said. “Not only would the stories be unrealistic if we wrote them ourselves, but our incomplete and/or biased view of incarcerated folks’ experiences can be harmful or triggering for them in VR – for example, resuming comfort around certain authority figures or neighborhoods.”

Through a series of co-design workshops, women in prison conceptualized, wrote, and designed the stories about stressful situations they would face after being released, Teng said, and those stories were shot by formerly incarcerated people at locations recommended by the women.

South Middlesex Deputy Superintendent Lynn Lizotte had heard about other facilities using VR in training videos for staff, and became interested in the idea of using the technology to help prepare returning citizens for re-entry. Lizotte reached out to Gordon through a chain of acquaintances, and Gordon decided it would make a great research project for a graduate student in the Media Design program.

At South Middlesex, the incarcerated women and personnel were split into two focus groups, Lizotte said, and were asked the same questions: What are your biggest concerns/stressors for when you are released (or, for support staff, what concerns are you hearing about from the women)? For those who had been released, what tripped you up?

One of the stories developed from these sessions takes the viewer through the process of applying for a job at a restaurant as a recently released woman. In another, the viewer is a just-released woman in addiction recovery who gets picked up by her best friend, and must navigate realistic temptations, i.e. drugs. 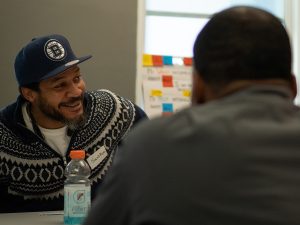 Because virtual reality is an immersive medium (here, other characters in the story address the viewers directly, and while viewers can’t fully interact with them, a voiceover narrates the kinds of thoughts that might be going through the viewer’s head), it’s much more emotionally potent than a traditional, third-person video.

“It’s sometimes called an ‘empathy machine,’” Gordon said of VR. “It can be used for therapeutic purposes for those experiencing trauma; it can also be used to generate understanding for those who have not been exposed [to formerly incarcerated people] before.”

Department of Corrections re-entry specialists told Gordon and Teng that one of the challenges of working with women is that their anxiety triggers tend to be more relational than those of men.

“We’re trying to capture that in these stories,” he said.

Lizotte said although there were a couple of women who were able to preview the episodes while they were incarcerated at South Middlesex who have since been released, by law the DOC is not allowed to contact them post-release to ask if the episodes helped. At the time they viewed the videos, pre-release, their feedback was positive, Lizotte said.

“But as fabulous as the video[s are], it’s really the conversation that happens afterwards where the real work is,” Lizotte said. “[T]he inmates can experience something [stressful] in a healthy environment [pre-release] and talk about it so they aren’t scared. And they’ve all said that, ‘I now realize I need to be better prepared. I didn’t think I’d react that way.’”

Gordon said the next steps would be to get funding to study the effectiveness of the VR-based discussion groups against other modes of re-entry preparation, including traditional two-dimensional videos; explore different methods of facilitation; and grow the library of VR content to include videos for men, youth, and non-English speakers.

But anecdotally, he said, he’s seen that just asking incarcerated and formerly incarcerated people about their thoughts and opinions and including them in the process of their own release is beneficial. One returning citizen who had been in and out of prison most of his life told him that what really clicked for him was when someone asked him – for the first time – what we wanted to do.

“The process of producing media can be equally impactful [as watching the videos], if not more,” Gordon said. “This project is about giving people agency over their own representation.”

Video: Soledad O'Brien Speaks with Students About Reporting 'The Truth'