The title of the event, “Women Using their Power to Empower,” part of the School of Communication’s Communication Days conference, rang true in nearly every woman’s leadership experience.

Dr. Agnes Atim Apea, a rural development specialist and chairperson of the Local Government Finance Commission of Uganda, shared the story of how she singlehandedly reformed the Ugandan government budget to reach rural citizens who had long been deprived of government support. Beatriz Merino, the first woman prime minister of Peru, discussed her role in defeating communist terrorist organization Shining Path. Tracy Bame, head of social responsibility at Freeport-McMoRan, broke boundaries in the corporate world by making her company among the first to invest in women’s leadership.

Early on in the discussion, Beatriz Merino shared some of the challenges that came with being the first woman to hold her position.

“On that first day when I walked in, I could see the pain and shock in the men’s eyes,” said Merino. “I had to sit down with one of them one day and say ‘Have you ever had a woman as a boss?’ He said no. ‘Have you ever had a woman as a peer?’ He said no. So I asked him, ‘How do you feel with me?’ and he said ‘It’s very difficult.’ And this was someone who really liked me and who I had a good relationship with.”

Merino went on to detail some of the unconventional ways she dealt with this sort of hostility.

“So, I usually wear very small earrings,” shared Merino. “But I said to my girlfriends, bring all of your earrings to my house, I need to borrow them. So every day, I wore a new pair. And while everyone was distracted and gossiping about the earrings, I got to work.”

Both Merino and Shipley became the first of many woman Prime Ministers in their respective countries. Shipley pointed to the diversity of woman leaders as crucial to women’s overall progress.

“All of the female prime ministers of New Zealand have had different styles, and I think that’s really important,” said Shipley. “It means that our daughters — and sons — have role models that are diverse.”

Shipley also spoke to the ways that having multiple woman leaders has shifted the gender narrative in New Zealand.

“Once you have multiple women in power, it becomes less exceptional. People stop looking at your hairstyle and your clothes,” she said. “They start to get past the gender and into the message, and that becomes the norm. I don’t think a political party in New Zealand is electable unless they can demonstrate diversity. In New Zealand, that means including both women and indigenous people.” 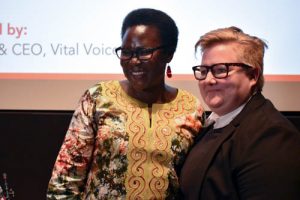 Taylor addressed some of the reasons the United States has yet to see this kind of shift.

“In the U.S., our language alone places obstacles in front of women candidates,” said Taylor. “We say things like ‘She’s not likeable,’ ‘She’s not electable.’ And then you think about someone like [Democratic presidential candidate and former Texas Senatorial candidate] Beto O’Rourke announcing his candidacy. No one is saying ‘Beto’s not likeable,’ even though he lost to the most unlikeable guy in the country, Ted Cruz.”

Despite women’s many obstacles, all of the panelists were optimistic about the future of woman leaders. Liswood discussed the ways women might be especially suited for leadership roles.

“Howard Gardner has a list of traits that make great leaders,” said Liswood. “One of them is that you’re willing to challenge authority. And women’s very existence is a challenge to authority.

“Another one is that great leaders have travelled outside of their own world view. We can define that as empathy,” she stated. “Because women have historically been out of power, they have had no choice but to develop that ability to travel, in order to understand what the dominant group is doing.”

The panelists offered varying advice for the young woman leaders in the audience. In response to a question about pay disparity, Apea shared a story from her experience as a public official.

“The position I hold in government is the least paid, for a variety of reasons,” said Apea. “So a few months ago I went to the minister of public service and started asking, ‘Why is my commission the least paid compared to the others?’ and he said to my face, ‘You’re a woman. Why would you want so much money?’

“The thing is, we women don’t usually ask, because we’re comfortable with what we have and we’re always downplaying our own worth,” Apea continued. “We need to learn how to accurately identify our net worth, and ask for it.”

Merino shared similar experiences from her time as a manager.

These stories resonated with Christine Vapsva ’19, a Political Communication major.

“I find myself underestimating my own worth all the time, especially as I’m applying to jobs for after graduation,” said Vapsva. “Hearing these incredible trailblazing women confirm that these setbacks are normal was both comforting and empowering.”