Writer, media maker, and Honors Program alumna Alexis Clements ’02 visited campus last Thursday to discuss the making of her first film, All We’ve Got. The feature-length documentary explores the definition of “community” and its presence — or absence — in the lives of LGBTQ+ individuals.

Clements spoke about her own coming out experience, recounting how the myth of community clashed with the reality of the LGBTQ+ spaces she encountered.

“You go into these [LGBTQ+] community centers, and you get really excited because you feel like you’re going to meet your girlfriend, you’re going meet all your friends, and your whole life is going to be made for you,” said Clements. 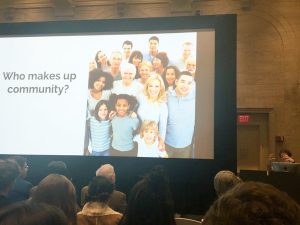 Not only are many LGBTQ+ spaces not as inclusive as they should be, but they face another problem altogether: they are disappearing. Spaces for queer women in particular have faced a rapid decline in recent years, which Clements partially attributes to gentrification. Gentrification has pushed community members farther and farther outside of cities like San Francisco, where a once vibrant LGBTQ+ community is rapidly dissipating.

The nationwide decline in LGBTQ+ spaces inspired Clements to embark upon a cross-country tour of venues where communities of queer women still come together. Along the way, Clements figured she “might as well document the trip,” and All We’ve Got was born.

The Esperanza Peace and Justice Center in San Antonio, Texas, is one such venue.

“[The founders of the Esperanza Peace and Justice Center] couldn’t separate their identities. They weren’t just lesbians, or women of color, or of a certain class,” said Clements.

Today, this overlapping of identities is widely recognized as intersectionality. However, during the Center’s founding in the early 1980s, discussions about the nuance of identity weren’t nearly as prevalent.

“At that time, there was a big question of how to actually live out all of these ideas. That’s precisely where the center came in,” said Clements.

The Esperanza Peace and Justice Center’s crucial sociopolitical function gets at the core of Clements’ definition of “community.”

Clements defines a community as “a group of people working toward a common goal.” These groups are often geographically close, and they always include some level of accountability.

“Accountability is a huge part of what makes communities stick,” said Clements. “For example, if I say that I’m a member of a community, and then I go out and do something that’s going to directly hurt that community, then they’re going to call me out on it. They might say ‘You know what, you said you were our friend, but you just went over there and sold us out.’ And that level of accountability is actually key to what makes a community.”

“My understanding of community up until this point was pretty much just in terms of labels. Like, I’m black so I’m part of the black community,” said Briscoe. “But hearing about the face-to-face accountability piece of it made me rethink about the communities I consider myself a part of.”

Clements also spoke at length about the crucial role community played in shaping her Emerson experience.

“I was at Emerson during 9/11, and I got really involved in the anti-war movements that came as a result of the attack,” Clements shared. “I think that was my first meaningful experience of community. It was really a place where I could develop leadership skills while also building a support network.”

“It was amazing to hear how transformative it was for [Clements] to engage in political and other kinds of community, even during her time at Emerson,” said Ansell, dean of the Institute for Liberal Arts and Interdisciplinary Studies, which sponsored Clements’s visit along with the Institute’s Honors Program.

“It’s also important for students to think about the fact that communities are not just something you put on your resumé,” added Walters, a professor in the Institute and director of the Honors Program, “but they can really give you life skills and a purpose.”

Throughout the talk, Clements made it clear that truly productive communities are critical for the wellbeing of individuals. Clements had one final statement for students who may take the Emerson community for granted.

“When you leave college, it can be hard to remember how to build those deep connections,” said Clements. “But no matter what happens, don’t forget about community.”